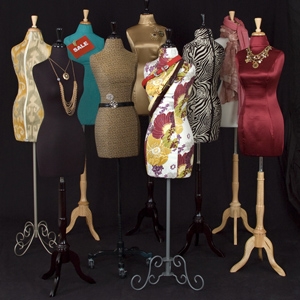 You may know dress forms as tools to help you sell merchandise to customers, but in reality, they are so much more. These resources have been used by everyone from store owners to ancient rulers, and they have stuck around to this day thanks to their extreme usefulness. Whether you need something that will help you show off clothing, cap off a table or window display, or even make alterations a breeze, dress forms may be just the ticket.

Why dress forms?
Dress forms are among the most vital store fixtures you can have. Their design is such that they can accurately display just how an ensemble will hang on a figure, and the forms are available in various sizes and shapes, so people can get a true depiction as to how the outfit will look. They have also been used for sewing and tailoring clothes. Having a dress form that is in the shape of the body can show just how pieces will fall and fit, making it easier to adjust the garments.

Some store owners may find that dress forms are preferable to mannequins when it comes to displaying clothing. Contrary to dress forms, mannequins are often three-dimensional representations of the entire body, and they are usually set in unique positions that can alter the how the pieces look. As a result, forms often provide a more accurate picture of how an outfit will hang on a certain body type.

As an added bonus, these forms are usually easier to manage than full-size mannequins, allowing store owners to move them around or transport them to trade shows with less hassle. The absence of a head and limbs on the form also makes it much so you can change outfits or switch up displays at a moment’s notice.

The evolution of dress forms
One of the first instances of dress forms can actually be traced back to ancient Egypt. When Howard Carter opened King Tut’s tomb in 1923, he found a crude wooden dress form nearby – a stand that was likely used to display the ruler’s clothing. In fact, this dress form was made exactly to the pharaoh’s measurements, making it a valuable piece of information as well as a significant milestone in the world of fashion.

King Tut wasn’t alone, however. According to Mannequin Madness, Nero’s wife had a dress form of herself made to review her clothing choices. In the same vein, several European royals had forms made of themselves and fellow monarchs throughout the centuries, with many of these tools used as peacekeeping gifts.

Dress forms were restricted for the richest and most important people until the late 19th century, when electricity forever changed the way store displays were set up. As lighting and large panes of glass revamped window displays, more stores began integrating dress forms into their operations. It was easier than ever to show off the hottest styles and trends, and the fashion world wholeheartedly embraced these tools.

Today
Things have come a long way since the days of ancient rulers. Today, dress forms are a common sight at many boutiques, department stores and other shops, regardless of what type of merchandise the owners are trying to sell. Suits, dresses, individual items, dressmakers, sewing services – all of these can be promoted with the help of the right form.

When purchasing dress forms, you’ll likely have to make several decisions about what kind of display you want set up in your store. For example, you can choose from different materials and colors, as well as varying sizes. In many instances you will have to order bases or stands as well, in the event you want the forms to be freestanding and not integrated into table displays.