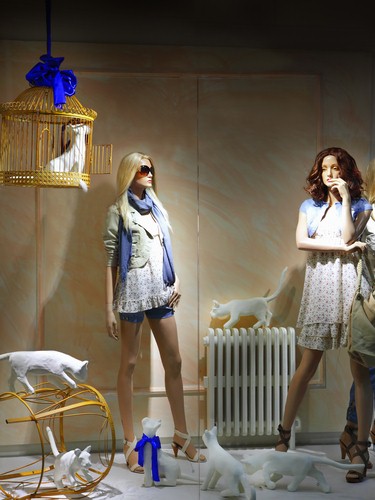 Holiday window displays have become a Christmas tradition in their own right. The season just wouldn’t be as festive if retailers didn’t add to the magic by creating fantastic and beautiful scenes in their big glass windows. If you plan on changing up the front of your store before December 25, you may want to take a hint from some of the stores recently profiled by CNN International.

At Selfridges, a store in one of London’s shopping districts, photographer Bruce Weber has created an excellent display using some giant set pieces. There are over-sized nectarines, cherries and pomegranates as well as an enormous hourglass. In the center of his display sits a dapper male mannequin who looks like he’s pondering what he should be doing with all of the delicious Christmas food and beverages that pepper the rest of the display.

London’s Ralph Lauren has taken a different approach, the news source reports. The store has gone all white, with big piles of snow and mannequins dressed in pale, elegant dresses. They’ve also added some animals to the scene – in one window there are two albino peacocks and in another stands a snow-white elk.

In Paris, Galeries Lafayette department store has also gone wild – it has incorporated a large, stuffed polar bear in its window display. The bear is surrounded by miniature mannequins and suitcases, with a diamond-patterned mirror backdrop.

The Huffington Post profiled some of the best displays in New York City. ABC Carpet and Home was mentioned because merchandisers there added some nature into their front window. The window shows branches and a bare pine tree set underneath an elegant chandelier. The designers used both mannequins and forms to showcase their products.

Bergdorf Goodman’s display is equally creative. This store’s designers chose a bright red background framed in gold – both excellent holiday colors. It has a bit of a roaring ’20s theme, with gears, bird cages and ladders set behind a mannequin in a gold, flapper-style dress.