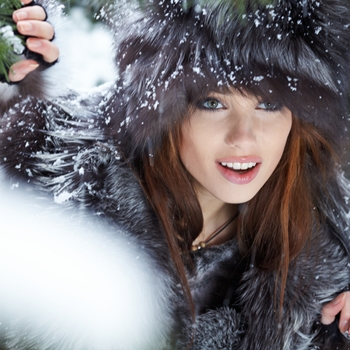 The weather is quickly changing and more people are heading outdoors bundled up with scarves, coats, gloves and, of course, hats. Autumn weather is perfect for wearing trendy hats – it’s that sweet time of the year when the weather isn’t hot enough to make a hat uncomfortable, nor is it cold enough to require a head covering that’s more functional than fashionable. Winter weather may require something heavier, but it’s not impossible to find cold-weather headgear that goes with a cute outfit or stylish coat.

As the temperature drops, more customers will be on the hunt for cool fedoras, warm knits and chic fleece toppers. Read on for tips about how to display this year’s most stylish hats for women, men and children.

Fall hats
For women’s hats, floppy brims are in, according to Harper’s Bazaar. The season’s color scheme is traditional – think camel brown, royal blue, cabernet red and timeless black. Dunaway hats with leather bands are perfect for a cute look on cool day while wide-brimmed felt hats are great for those anomalous warm days of the season. Even if your store is located in a part of the country that doesn’t see much seasonal change, count on women looking for lightweight toppers to complete their outfit. Although floppy brims are the big thing this season, a few stiff-brimmed wool hats are also making appearances on the streets and around the Web. Two-toned hats with visible stitching combine a nostalgic cowboy look with a modern hipster feel.

Fedoras are a must-have for women and men this year – though that doesn’t mean they’re a unisex item. Women’s fedoras tend to be flatter, wider and come in more colors. Unlike the men’s fedora, which is a fairly ubiquitous accessory, the women’s style is usually meant to match a specific look. Men’s fedoras, on the other hand, come in varying shades of brown, black and gray. They’re meant to be worn with coats and vests, though some men are beginning to pair a black fedora with a gray sweater. A word of caution: Don’t confuse the fedora for the short-brimmed porkpie hat, which tends to lend itself to the warmer seasons.

Displaying women’s hats can be more challenging than it looks. If you’re selling a hat that goes well with a specific set of other items, you should display them together on one of Firefly’s custom color mannequins. However, if you feel that a certain hat goes with a number of items, consider displaying it near the other pieces rather than directly on top. For example, if you’re selling several knit sweaters in various colors, use a head form to display the hat in the midst of a few other forms – just remember to keep it at or slightly above eye level.

Winter hats
When it comes to winter hats, the styles run the gamut from beanies to turbans, reported Elle magazine. What kinds you stock will of course depend on the the local climate. For the harshest of winters, beanies and earmuffs are going be the safest bet. These styles are definitely more utilitarian than others, but that doesn’t mean they can’t be fun to wear. Typically, beanies are a flat color with a folded brim. Some have pompom toppers, though those are often associated with children’s wear. As for earmuffs, fuzzy is the way to go. Display them on a head form with a matching scarf to increase the chances of a multi-item purchase.

In more temperate climates, you’ll probably see women extending the fashion life of their fall headgear. This is good news for retailers, because it means you won’t have to dump your fall stock if it doesn’t sell well in the autumn. However, you can add berets to the list of women’s winter fashion accessories. Traditional and knit berets have become more popular in recent years – match colors with coats when displaying them.

As for the men’s side of winter hats, you should definitely carry beanies and fur-lined trapper hats. If you want go for a trendier vibe, GQ U.K. reported that herringbone newsboy caps are going to be popular this winter. As with the autumn pieces, men’s winter hats are usually going to be gray, brown or black with an occasional navy blue appearing on younger hat-wearers. For a sporty look, deerstalker caps are making a comeback. They have a short front brim to keep the harsh winter sun of the eyes, and they usually have ear-flaps that can be secured with a button or clasp.

“Encourage customers to feel the warmth of the material.”

Men’s hats are usually designed to be worn with a variety of clothing items, so you don’t necessarily need to match them up with specific outfits – instead, match them with other accessories like scarves, gloves, ties and bags. You should even think about pairing them electronic accessories like phone cases and tablet carriers.

Children’s hats
When it comes to children’s hats, the two most important aspects are how warm the piece is and how fun it is to wear. According to Children’s Salon, warm knit hats with lots of bows are very popular with young girls. Boys like dark colors with stripes or words embroidered on them. For very young children, hats with fun stitching in the shape of cartoon characters or animals are a big hit. Consider using Firefly’s shorter head form for children’s displays. Encourage customers and their children to feel the fabric of the display model so they can get a feel for how warm it will be.

Keep these tips in mind when displaying your autumn and winter hat selections and you’re sure to see customers taking notice. Keeping abreast of seasonal fashion trends will help you rise above the competition and stay relevant.To tie everything together, use several mannequins to make a family display at the front of your store. Show customers how mom, dad and their little ones can look stylish together. Check out Firefly’s unisex forms for displays that you can use year round.