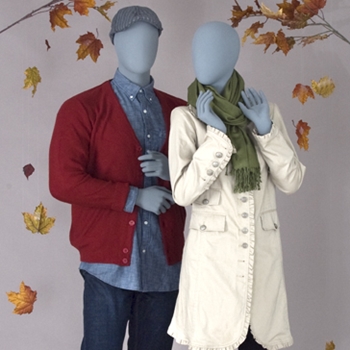 It’s a bit of an obvious statement, but selling popular merchandise will drive your store traffic up. However, potential shoppers first have to find out that you’re in the business of trendy styles – or they may never step into the store.

Although fashion designers revealed trends for the cold-weather seasons ages ago, the styles are finally becoming relevant in the real world. Temperatures are starting to fall and consumers will soon notice that they actually need one more pair of jeans or a warmer sweater before winter hits. As a result, now is the best time to showcase your trendiest clothes on display fixtures so as to catch the eye of loyal and potential customers alike.

Men
Once pigeonholed as a fashion statement for the less hip among us, turtlenecks are certainly in this season. Whether men choose to wear a roll neck sweater with an interesting pattern or a solid-colored turtleneck under a sports coat, they’ll look like they just walked off the runway. Patterned knit sweaters are popular as always, but according to Business Insider, they’re especially fashionable when worn as part of a layered outfit, such as atop a collared shirt.

Flannel is still quite popular, for both genders. Consider dedicating a whole display table to your flannel selection so shoppers know exactly where to go in the store. Think about displaying a Female Mannequin next to a Male Mannequin to portray the slight differences in men and women’s styles of flannel shirts.

Shearling lining is expected to be all the rage, especially when it’s featured on a bomber jacket, Business Insider said. Real shearling is a material made from sheep and lamb skin, but it’s common for stores to sell merchandise made with synthetic shearling because it’s less expensive, according to FashionBeans.com. Most of the time, the fuzzy fabric peeks out from the collar or lapel of a warm jacket. Business Insider also referenced down-filled quilted jackets as a hot seller for fall and winter. As seen on the runway from Calvin Klein and Alexander Wang, the key is to find a jacket that’s super warm without being too puffy.

According to Business Insider, skinny-leg sweatpants are in for fall. Say goodbye to guys lounging in baggy sweats with this trend. The slim fit is lovely for an afternoon movie marathon during the rainy fall, yet it also works perfectly with boots when snowstorms blow in.

Women
Glamour magazine highlighted women’s two-piece outfits as a popular look this fall season. Between skirts and top pairings that look more like dresses and casual suit-like styles, there are plenty of matchy options for women. Dress a mannequin with a cute posture in one of your best selling two-piece outfits and arrange the rest of the selection nearby. If it makes sense for people to buy them separately or paired with another item, give each part of the design an individual hanger.

Leopard print is being hailed as a staple of fall and winter fashion, from outerwear to accessories. Vogue gave honorable mention to designers such as Gucci, Giorgio Armani and Saint Laurent for the ferocious pieces they sent down the runway.

Last year, army green jackets for fall and spring took trending style by storm. Turns out that shade of military green isn’t going anywhere this season. Calvin Klein designed a long green coat for women, which his model wore with black lace-up boots. According to Cosmopolitan, there’s an overall military chic vibe that will show its popularity as the warm weather diminishes.