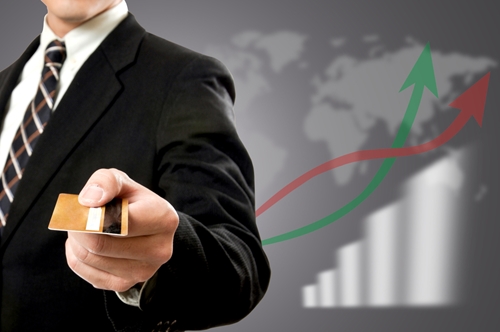 Retailers have been using store marketing to try and get customers in their stores. Clever window displays and bright store signage can pique people's attention, and it seems to be working.

The Commerce Department announced that purchases increased by 0.7 percent, giving analysts cause for optimism. January's increase of 0.4 percent had beaten economists' expectations, and the month-over-month growth in February was the largest seen in the past five months.

The increase in spending might have been related to the growth in payroll. The Commerce Department reported that salaries in February rose to $6.2 billion a slight uptick from the $6 billion seen in January.

Additionally, following 4 percent decrease in disposable income as seen in January, February's figures rose by 0.7 percent. Because of the growth in disposable income, shoppers may have been more willing to open their purse strings in some of their favorite stores.

Reason for optimism
Spending wasn't the only thing to experience an increase in February. A study from the University of Michigan reported consumer confidence is also on the rise. The numbers indicated a rating of 78.6 in March, a clear growth from the 77.6 rating in February. The analysts suggest that consumer spending is correlated with optimism, which could be why both experienced an uptick during February.

Consumers were not alone in showing optimism with the economy. Analysts are revising their expectations for the year, with some suggesting that the market could be on the upswing in the near future.

Ashworth continued that these numbers were especially impressive, given that consumers had to deal with the increase in payroll tax at the beginning of the year, something that many economists felt would deter spending.

Retailers need to continue the momentum
Shop owners realize that a growth in sales needs to continue in order to have a good year. Marketing is really important during this time, and adding display tables and a little extra signage could make a big difference. By offering more promotions, more shoppers who may have otherwise avoided spending may come into the store to get a deal.