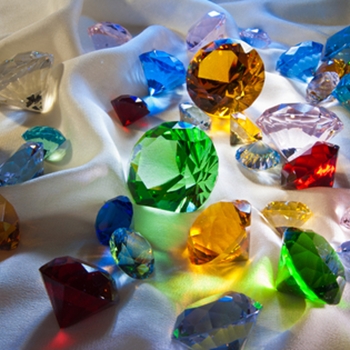 It can be difficult for people to choose jewelry for their loved ones. Some recipients have very specific tastes and the cost of such a gift warrants careful consideration.

One easy way for customers to find the perfect sparkly present for a special someone is by shopping for birthstone jewelry. Everyone has a semiprecious stone assigned to his or her birth month that’s said to represent certain qualities and sentiments. To make shopping a breeze for patrons this holiday season, craft store displays that feature your selection of birthstone merchandise.

Garnet – January
While you likely consider the garnet to be an exclusively deep red stone, it actually comes in a range of colors. It’s been used since the days of ancient Egypt, when the stone was set into jewelry and other handcrafted goods. According to the American Gem Society, garnets are often found in India, Africa and Sri Lanka. The meanings associated with garnet include safety and trust.

Amethyst – February
Its deep purple color helped amethyst become a symbol of royalty. This violet variety of quartz was believed to protect wearers from intoxication, particularly in ancient Greece and Rome. Amethyst is mainly found in the South American countries of Brazil and Uruguay. Jewelers of America explained that it’s a hard gem, meaning amethyst stones won’t scratch or break easily. Display perfect purple pieces on a burlap jewelry pad for holiday shoppers.

Aquamarine – March
Mainly found in Brazil, aquamarine is associated with the ocean and safety for sailors. The name comes from the Latin words for water and the sea, which is based on its blue-green hue. According to the American Gem Society, the intensity of the color depends on how large the stone is, but heat treatments help bring the shades of blue out.

Diamond – April
The hardest natural substance and the most desired stone, people born during April are lucky to be linked with diamonds. It’s the symbol of ever-lasting love and comes in a huge range of colors, though blue is the rarest form.

Emerald – May
The purer and deeper the shade of green, the more desirable the emerald is. It’s a more sensitive stone than most, so wearers should be careful not to scratch or crack their jewelry. Emeralds represent hope and rebirth. Most of the emeralds you sell were likely found in Colombia.

Pearl – June
The only birthstone to come from a living creature, pearls are found in both fresh and saltwater mollusks. The round, whitish stone develops in sea oysters and freshwater mussels to yield June’s symbol of purity.

Ruby – July
Passion, love, health and courage can all be communicated with ruby jewelry, especially for loved ones born in July. It’s been called the king of gems, particularly for its deep red appearance, which is achieved with the help of heat treatments.

Peridot – August
The pale green color of peridot is said to imply strength. This stone is created by volcanic activity, meaning it’s found in locations such as Hawaii and Italy. However, the most common place to discover peridot in America is the San Carlos Native American reservation in Arizona.

Sapphire – September
Corundum stones of every shade besides red are considered sapphires, but the most popular type is the medium to dark blue pieces, sometimes with hints of purple. This stone is thought to protect people from evil and represent heaven or purity.

Opal – October
Latin for “precious stone,” opal is sometimes thought to imply faithfulness or hope. Most opals come from the deserts of Australia. They have one of the widest varieties of colors and shades, so it’s important to display a complete sampling. Don’t forget to order enough Burlap Earring Pendants to show off your whole collection.

Topaz – November
While topaz is also available in a range of colors, the golden-brown variety is what people often associate with November. Citrine, the healing quartz with a similar hue, is also considered the November birthstone. Brazil is a significant source for both topaz and citrine, although you can also find topaz in Nigeria.

Turquoise – December
December actually has several birthstones, but they’re all shades of blue. Whether you choose to promote blue topaz, tanzanite or turquoise, Burlap Necklace Busts are a great fixture to use.