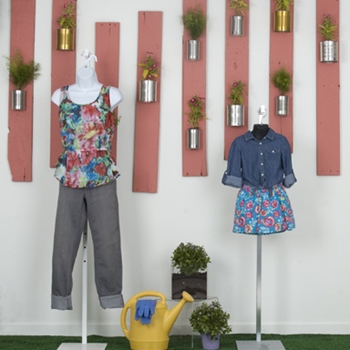 As you likely know, switching your window display designs up regularly can increase their effectiveness. You’ll capture the attention of people who walk past your store often each time you showcase a new design, and entice passersby to become first-time shoppers.

Before March passes you by, try out one of these window display themes.

1. The go-to holiday
When people think of March, their minds often go straight to the month’s main holiday – St. Patrick’s Day. Celebrations surrounding the special day range from religious and traditional to raucous and heritage-based. The holiday that was created to honor the patron saint of Ireland has become an event dedicated to Irish culture in general. Some of the go-to themes of St. Patrick’s Day are four-leaf clovers, leprechauns and pots of gold. The color green is heavily featured in everything relating to St. Patrick’s Day, with orange and white often serving as accent hues.

Depending on the type of merchandise your store carries, the best way to remind customers of the holiday is with an emerald display. Peruse your products for green items you can display, whether it’s the newest collection of green sweaters or kitchen appliances packaged in green boxes. Try to include a variety of shades to give the display some dimension, but make sure you don’t overcrowd the window and ruin its effectiveness. Use hanging paper decorations in green for a festive addition to the display.

2. The old saying
You know what people say about March – it comes in like a lion and goes out like a lamb. The origin of this phrase isn’t known for sure, but its first recorded use was in the 17th century. It’s used to describe the transitioning weather. Winter is often still going strong when March begins, with its gray skies and frosty temperatures. However, by the end, spring has begun and temperate weather is on the way.

Demonstrate this metamorphosis in your window displays this month. Divide the visual space in half, dedicating the left side to winter’s demise and the right to the newfound spring climate. You can do this with props and decorations, or with relevant merchandise that reflects the different weather patterns.

3. The changing seasons
Although the weather doesn’t always reflect this fact, March brings the first official day of spring. This year, the Spring Equinox takes place March 20, making it a perfect theme for window displays in the second half of the month. You still have “April showers” and “May flowers” to consider in the upcoming months, so you may want to brainstorm spring-related designs that go in a different direction.

“Show the sun emerging after a long winter.”

For example, Daylight Saving Time starts during March, which means longer and brighter days. Play off of this idea with a window display that shows the sun emerging after a long winter. Use your art materials of choice to craft a large sun – papier-mâché could yield fabulous results – that you can suspend from the ceiling. If your store sells apparel, you can showcase some of your most stylish outfits that exemplify spring fashion trends. For book stores, gather titles that mention the season or month to arrange on literature racks in the window.

4. The celebration of humanity
Although Black History Month ended when March began, there’s another group of people to honor this month. March is Women’s History Month, a time to celebrate the strength of women and everything they’ve accomplished. According to the Library of Congress website, many major government organizations are part of the month-long holiday, including the National Archives and Records Administration, National Endowment for the Humanities, National Gallery of Art, National Park Service, Smithsonian Institution and U.S. Holocaust Memorial Museum. Join these prestigious groups in praising women around the world.

A window display for Women’s History Month can be simple yet effective. Use your female mannequins and creative signage to convey your respect for strong women. You can make signs that mention important dates in history, such as the year women were allowed to vote and Dr. Sally Ride’s voyage as the first American woman in space. Another idea is to write a powerful quote from a renowned champion of women’s rights on the window’s glass.